Every Tuesday Diane at Bibliophile by the Sea hosts First Chapter First Paragraph Tuesday Intros to share the first paragraph sometimes two, of a book that she’s reading or planning to read soon. This week I’m featuring The Red House by Mark Haddon. 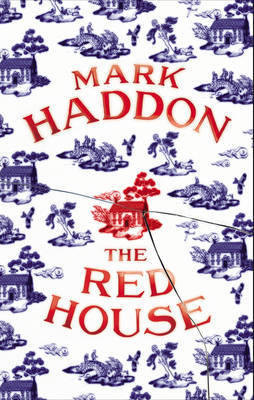 Cooling towers and sewage farms. Finstock, Charlbury, Ascott-under-Wychwood. Seventy miles per hour, the train unzips the fields. Two gun-grey lines beside the river’s meander. Flashes of sun on the hammered metal. Something of the steam about it, even now. Hogwarts and Adlestrop. The night mail crossing the border. Cheyenne sweeping down from the ridge. Delta blues from the boxcar. Somewhere those secret points that might just switch and send you curving into a world of uniformed porters and great aunts and summers at the lake.

I was struck by the imagery of the train unzipping the fields and the mix of different train journeys, with the hint of nostalgia and the promise of something unknown about to happen. And I like the cover – the small black illustrations against the white background and the black lines meeting at the red house.

Family, that slippery word, a star to every wandering bark, and everyone sailing under a different sky.

After his mother’s death, Richard, a newly remarried hospital consultant, decides to build bridges with his estranged sister, inviting Angela and her family for a week in a rented house on the Welsh border. Four adults and four children, a single family and all of them strangers. Seven days of shared meals, log fires, card games and wet walks.

But in the quiet and stillness of the valley, ghosts begin to rise up. The parents Richard thought he had. The parents Angela thought she had. Past and present lovers. Friends, enemies, victims, saviours. And watching over all of them from high on the dark hill, Karen, Angela’s stillborn daughter.

The Red House is about the extraordinariness of the ordinary, weaving the words and thoughts of the eight characters together with those fainter, stranger voices – of books and letters and music, of the dead who once inhabited these rooms, of the ageing house itself and the landscape in which it sits.

Once again Mark Haddon, bestselling author of The Curious Incident ofthe Dog in the Night-time and A Spot of Bother, has written a novel that is funny, poignant and deeply insightful about human lives.

What do you think – would you read on or not?