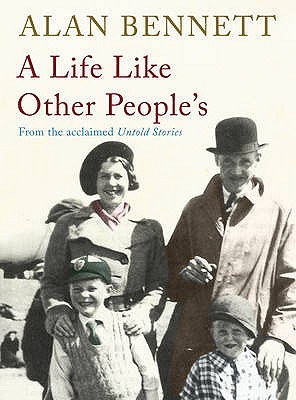 Alan Bennett’s A Life Like Other People’s is a poignant family memoir offering a portrait of his parents’ marriage and recalling his Leeds childhood, Christmases with Grandma Peel, and the lives, loves and deaths of his unforgettable aunties Kathleen and Myra. Bennett’s powerful account of his mother’s descent into depression and later dementia comes hand in hand with the uncovering of a long-held tragic secret. A heartrending and at times irresistibly funny work of autobiography by one of the best-loved English writers alive today. (Amazon)

I really like Alan Bennett’s work and was pleased to find this little book in the mobile library recently. It’s a beautifully written book taken from his collection Untold Stories and illustrated with black and white photographs. There is drama in this memoir, but written with clarity and keen observation in quiet tones about lives that are anything but ordinary. It is a completely absorbing book as Bennett recalls his childhood. He writes about his family including his two aunties, Kathleen and Myra, two very different characters from their sister, his mother. They saw themselves as ‘dashing, adventuresome creatures, good sports and always on for what they see as a lark.‘ They wore scent and camiknickers, and had the occasional drink and smoked.

He writes of mother’s fears – ‘of being spied on, listened to, shamed and detected‘ of her dread of being ‘the centrepiece‘ especially at her wedding. His parents didn’t like ‘splother‘, his father’s word for ‘the preening and fuss invariably attendant on the presence of the aunties.‘ Then there are the sad facts about his mother’s depression and subsequent dementia as she descended into delusion, her stays in hospital and the effect that had on the family.

There are revelations of family secrets and many touching and sad (but never sentimental) episodes, for example the futile search for Aunty Kathleen, suffering from a condition similar to Alzheimer’s, after she just walked out of her hospital ward. She was found several days later in drenched undergrowth in a wood near the M6.

It is a sad book but also a heart-warming story – the love of his parents and family shines throughout the book.