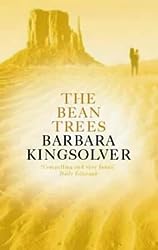 If I don’t write about a book as soon as I’ve finished it the details begin to fade. I finished reading  Barbara Kingsolver’s first novel, The Bean Trees a few weeks ago. So this is a short post on the book, which doesn’t really do justice to it!

I loved this book. Barbara Kingsolver writes in such a way that I can easily visualise the scenes, beginning with the opening paragraph in which she describes a tractor tire blowing up, flinging a man up in the air and throwing him over the top of a Standard Oil sign. Taylor (originally called Marietta/Missy) grew up in rural Kentucky. She left home when she had saved enough to buy a car, an old VW. She changed her name to Taylor after the first place where she ran out of petrol, which just happened to be Taylorville. She drove on until the car broke down in the middle of nowhere, on land owned by the Cherokee tribe. And it was there at a garage that an Indian woman abandoned a baby girl in Taylor’s car – she called the baby, Turtle.

They travel on to Tucson, where she settled for a while, living with Lou Ann, a mother whose husband, Angel Ruiz left before their son was born, and working for Mattie at ‘Jesus Is Lord Used Tires’. Mattie, however, is also involved in an underground railway moving illegal Guatemalan and Salvadoran immigrants to safe houses. She talks of the obligation under the United Nations ‘something or other’ ‘to take in people whose lives are in danger’. And Taylor becomes involved in helping her.

There are several themes running throughout this short, but well written book – both political and social including family relationships, particularly mother/child, sexual and physical abuse of small children, the integration of cultures, as well as the always current issue of refugees and illegal immigrants. I thought it was all thought-provoking as well as fascinating reading.

I have read some of Barbara Kingsolver’s later books, including The Poisonwood Bible, a longer and much more complex book, which I’ve read twice and loved. There is a sequel to The Bean Trees that I really want to read now – Pigs In Heaven.

Reading Challenges: What’s In a Name? in the category of a book with the word ‘tree’ in the title.

11 thoughts on “The Bean Trees by Barbara Kingsolver”