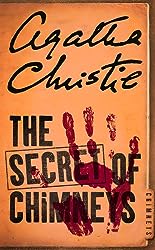 In The Secret of Chimneys, Anthony Cade is drawn into a deadly conspiracy when he agrees to carry out an errand for his old friend, Jimmy McGrath. He has to deliver the manuscript memoir of Count Stylptich of Herzoslovakia to a firm of London publishers and to return a packet of letters to a blackmail victim.

It’s one of Agatha Christie’s early ‘thrillers’, first published in 1925. It is also the last full length crime novel of hers that I had left to read. I really thought I had read it but I think I was getting it mixed up with The Seven Dials Mystery, which features some of the same characters and is also set at Chimneys, a large country house, the home of Lord Caterham. The Secret of Chimneys is the first book in which Superintendent Battle of Scotland Yard appears. He is an intelligent officer, outwardly impassive and stolid, but who reaches his conclusions applying common sense. Later he appeared in four more of her novels – The Seven Dials Mystery, Cards on the Table, Murder is Easy and Towards Zero.

Agatha Christie declines to describe Chimneys, other than to say it is a ‘venerable pile‘ and that descriptions of it can be found in any guidebook. ‘It is also No. 3 in Historic Homes of England, price 21s. On Thursdays coaches come over from Middleham and view those portions of it which are open to the public. In view of all these facilities, to describe Chimneys would be superfluous.‘ (page 128)

The 1920s upper class life style is evident in the lavish breakfast that is laid on at Chimneys, set out on ‘half a score of heavy silver dishes, ingeniously kept hot by patent arrangements. Omelet, said Lord Caterham, lifting each lid in turn. Eggs and bacon, kidneys, devilled bird, haddock, cold ham, cold pheasant.’ (page 134)

I’m not going to attempt to summarise the plot of this book, other than to say that it revolves around political events in the fictitious Balkan state of Herzoslovakia, with attempts to reinstate its royal family, and also international crime concerning the theft of jewellery  by a thief known in Europe as ‘King Victor’. It reminds me of P G Wodehouse’s books, written in the same light and humorous style.  It is sheer escapism and although it is not one of my favourite of her books, it is an entertaining book.

11 thoughts on “The Secret of Chimneys by Agatha Christie”