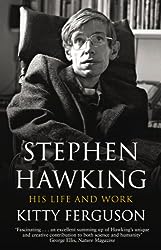 Stephen Hawking is one of the most remarkable figures of our time, a Cambridge genius who has earned international celebrity as a brilliant theoretical physicist and become an inspiration and revelation to those who have witnessed his courageous triumph over disability. This is Hawking’s life story by Kitty Ferguson, who has had special help from Hawking himself and his close associates and who has a gift for translating the language of theoretical physics for non-scientists.

Twenty years ago, Kitty Ferguson’s Stephen Hawking: Quest for a Theory of Everything became a Sunday Times bestseller and took the world by storm. She now returns to the subject to transform that short book into a hugely expanded, carefully researched, up-to-the-minute biography.

Recently I watched The Theory of Everything, with Eddie Redmayne playing the part of Stephen Hawking. I think it’s a brilliant film and it made me want to know more about Stephen Hawking. Stephen Hawking: His Life and Work by Kitty Ferguson, subtitled The Story and Science of One of the Most Extraordinary, Celebrated and Courageous Figures of Our Time, has certainly expanded my knowledge, even if some of the science is beyond me.

At first I read the scientific explanations carefully and felt I understood them until about half way into the book, when I struggled and ended up skim reading passages. I could cope on an elementary level with quantum mechanics, the uncertainty principle is not new to me, nor the theory of black holes, and singularity. I learnt about the ‘event horizon’, which is the ‘radius-of-no-return where velocity becomes greater than the speed of light’, and about Hawking Radiation, the radiation produced by a black hole. But when I got up to ‘brane’ theory and p-branes, I was lost – it’s too mathematical for my pea-brain! But I still think I learned a lot. It helps that there is not only an index, but also a glossary that explains many of the scientific terms (not p-branes, unfortunately).

The book moves between biography and Hawking’s work, painting a picture of a warm, likeable, humorous, and courageous man with an exuberance for life. There’s a lot about his health, his career, his trips abroad and his relationships with colleagues. But not much about his marriages or divorces; I expect that was Hawking’s preference. I hadn’t known that he liked Marilyn Monroe, having a life-size picture of her on the door of his office, or that he has co-written children’s books with his daughter Lucy. They look very good!

I was fascinated, as I was when watching the film, with how he lives with Amyotrophic Lateral Sclerosis (ALS) a form of motor neurone disease and the remarkable fact that he has lived so long with this condition and yet can say, ‘ Although I cannot move, and I have to speak through a computer, in my mind I am free.‘ (page 434)

Hawking’s life and his science continue to be full of paradoxes. Things are often not what they seem. Pieces that fit together refuse to do so. Beginnings may be endings; cruel circumstances can lead to happiness, although fame and success may not; two brilliant and highly successful scientific theories taken together yield nonsense; empty space isn’t empty; black holes aren’t black; the effort to unite everything in a simple explanation reveals, instead a fragmented picture; and a man whose appearance inspires shock and pity takes us joyfully to where the boundaries of time and space ought to be – and are not. (page 17)

I have an e-book of Jane Hawking’s book, Travelling to Infinity; My Life with Stephen, which I’ll be reading sometime soon.

4 thoughts on “Stephen Hawking: His Life and Work by Kitty Ferguson”