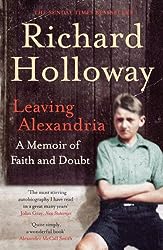 I was browsing the biography section in the local library when I came across Leaving Alexandria: a Memoir of Faith and Doubt by Richard Holloway. I vaguely remembered that he had been an outspoken bishop who had resigned some years ago and I thought it would be interesting to read what had led up to his resignation. The blurbs on the back encouraged me to borrow the book:

This poignant memoir, written with integrity, intelligence and wit, lays bare the ludicrous and entirely unnecessary mess we have made of religion. (Karen Armstrong)

So compelling and so intense. Nobody, whether interested in religion or not, could fail to be intensely moved … What a deeply lovable man; and what a wonderful book. (Mary Warnock, Observer)

In the past I have read many books on religion, mainly on Christianity, but I am not currently a church goer and I know little about the Anglican Church and next to nothing about the Scottish Episcopal Church – Richard Holloway was the Primus of the latter. Reading Richard Holloway’s own account of his beliefs and doubts was without doubt an eye-opener.

Leaving Alexandria is fascinating. Richard Holloway grew up in Alexandria, a town in the Vale of Leven, north of Glasgow. At the age of fourteen he left home to train for the priesthood at Kelham Hall in Nottinghamshire, the mother house of  the Anglo-Catholic Society of the Sacred Mission, an order that trained uneducated boys for the priesthood in a monastic setting. Subsequently, he worked in Africa, the Gorbals in Glasgow, Boston, and Old Saint Paul’s in Edinburgh before becoming the Bishop of Edinburgh. His resignation in 2000 as the Bishop of Edinburgh came when he was 66.

He had a controversial career, dubbed the ‘Barmy Bishop’. He was an outspoken champion of progressive causes, but he had many crises of faith and at times was plagued with doubt, experiencing God as an absence. To me that sounds as though he wasn’t sure about the existence of God. He ponders whether religion is a lie and states that it is a ‘mistake’:

I was less sure whether God was also just a human invention, but I was quite sure religion was. It was a work of human imagination, a work of art – an opera – and could be appreciated as such.  The real issue was whether it should be given more authority over us than any other work of art, especially if it is the kind of authority that over rides our own better judgements. (page 343)

In the Epilogue he explained that he came to believe that

Religion is human, and like humanity it is both a glory and a scandal. It is full of pity and full of cruelty. Just like us. So is the Bible.

He went on that he had discovered his real dilemma:

I wanted to keep religion around, purged of cruelty, because it gives us a space to wonder and listen within. Purged of the explanations that don’t explain, the science that does not prove, the morality that does not improve; purged in fact, of its prose, religion’s poetry could still touch us, make us weep, make us tender, and take us out of ourselves into the possibility of a courageous pity. (page 345)

He resigned at odds with many strongly held Episcopal Church doctrines and beliefs, and precipitated by the publication of his book Godless Morality. It was because of the Church’s insistence on rules, its attitudes towards women and homosexuals, and its inability to understand the nature of myth. But he had struggled all the way through, feeling himself a disappointment, often knowing that he was a ‘double-minded man’ and ‘unstable, if not in all my ways, then certainly in many of my attitudes and opinions. Janus-like, I seemed able to look two ways at once, be in two minds about things.’  My question is not why he resigned, but why it took him so long, and how had he become a bishop at all?

There are many things about Richard Holloway that I like, but overarching them all is his compassion and his honesty. There are so many passages I could quote, including this one describing the opponents of women’s ordination:

I am sure that I have not really done justice to this book and refer to this review of Leaving Alexandria by Mary Warnock in The Guardian/The Observer 19 February 2012 and to an interview with Richard Holloway at the Gladstone’s Library 26 February 2012.