Cath’s list of her favourite books of 2013 included Rendezvous with Rama by Arthur C Clarke, which reminded me that we have a copy of that book and I haven’t read it. It was up in the loft in a box of sci-fi books we’ve owned for years and I decided to get it down from the loft and read it. However, when I opened the box, Edmund Cooper’s The Uncertain Midnight looked more enticing and so I read that book – Rendezvous with Rama will have to wait a bit longer before I get round to it. 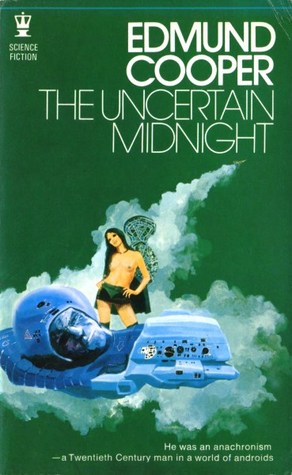 D and I aren’t sure how long we’ve had this book. He read it years ago at a time when he was reading lots of sci-fi books. It was first published in 1958 and our copy is a 1971 edition, so we’ve probably had it since the early 70s!

In the Foreword Cooper wrote that it was his first novel, which was published in America as Deadly Image, but he preferred his original title. In 1971 Cooper acknowledged that he wrote it a long time ago:

It was before the Space Age, before the development of lasers, before it was possible to give a man a new heart.

I like it because of that; it’s low on technology and high on philosophy. It’s not set in outer space, but firmly on Earth  – but Earth in the 22nd century, a world run by machines, androids, who have taken over the burdens of work and responsibility, a world where the humans are required to spend their lives in leisure pursuits, but are subject to ‘Analysis’ (brain-washing) if the androids think they are maladjusted .

John Markham emerges in 2113 after spending 146 years in suspended animation, frozen deep under ground after an atomic holocaust had devastated his world. In 2113 not all humans were happy to leave everything to the androids. Known as Runners these humans believed in ‘human dignity, freedom of action and the right to work’. Markham struggles to adapt and this raises the question of whether the androids could be said to be alive – leading to discussions about the definition of life, the difference between determinism and free will, and eventually leading to war between the androids and the Runners.

I thought it was fascinating.

5 thoughts on “The Uncertain Midnight by Edmund Cooper”