Although it’s not yet summer here, it’s been feeling like it this last two weeks. We’ve had some gloriously sunny days, which made me think of cooking something from Nigella Lawson’s Forever Summer. This is a book full of recipes to give you that summery feeling all year round. There are recipes from around the world and I decided to make Strawberry Meringue Layer Cake.

Nigella writes that this is an Oz-emanating recipe that she scribbled down from a friend after a gardenside Sunday’s summer lunch.

Then add the pavlova mixture – whisk the 2 egg whites until soft peaks form, gradually add 200g caster sugar and spread a layer of the meringue on top of the sponge batter in each tin and sprinkle over 50g flaked almonds.

Bake for 30 – 35 minutes in a preheated oven – 200°C/gas mark 6 until the almond scattered meringues are a dark gold. Let the cakes cool in the tins until you’re ready to assemble the cake.

Whip 375ml double cream and hull and slice 250g strawberries and sandwich the cream and berries between the two cakes – meringue on the base layer and on the top.

I made this last weekend when we had the family round,  As Nigella suggested I placed more strawberries in a separate dish to eat alongside the cake and it was half gone by the time I remembered to take a photo of it. It’s definitely a recipe I’ll be making again – it’s scrumptious. 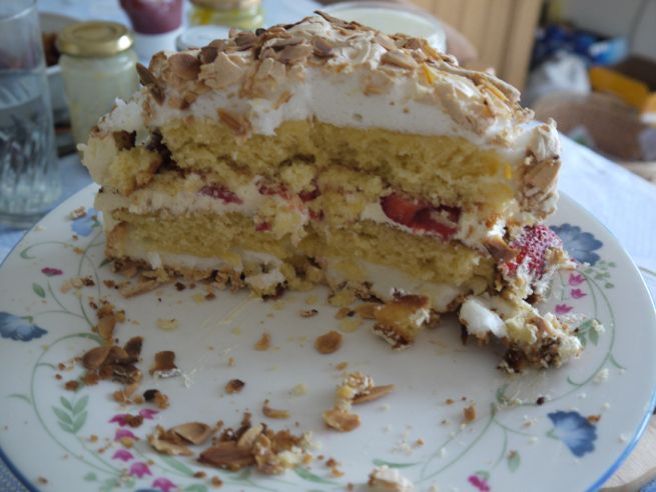