I’ve previously written about what I was reading ten years ago so when I read Literary Feline’s post about the books she read in January 2004. I thought I’d have a look at what I was reading five years ago. It was in that month that I once again tried to keep track of my reading – I hadn’t recorded my reading since February 2003!  Even then it seemed to be a bit of a hit and miss affair.  I just jotted down a few details about each book.

The first entry in January 2004 is Iris by A N Wilson. A year earlier I’d read John Bayley’s

biographies of Iris, which I found rather uncomfortable reading with maybe too many personal details for my liking. Iris had died in February 1999 after suffering from Alzheimer’s Disease. I’d also read Iris Murdoch: a Life by Peter J Conradi. This is a very different account of Iris. I’d noted that it was “very long and detailed – mainly a literary biography – OK when I had read the books – most interesting when about events and descriptions of her and John.”

A N Wilson’s biography is very different yet again and all I noted was that it was interesting because of that. This book received some very critical reviews, but I didn’t know that when I read it.  It made me want to read more of her books so I then read The Italian Girl as that was the only book by her on the shelf in the library. I thought it was “quite strange with unattractive characters”. I enjoyed it though and thought it “does make you want to know more about them, what happens and why. Not a book to re-read.”

Unlike the next book I read – Middlemarch by George Eliot, which I thought was “very good,

very long and in places too wordy, but excellent in character description, analysis and plot development. I’d seen it on TV but long enough ago to forget what the characters looked like so it was easy to use my own imagination. Lots of different characters and much social background of 19th century England.” I still dislike having TV or film adaptations of books intruding into my own vision of how the characters look. 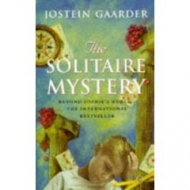 The last book I wrote about in January 2004 was The Solitaire Mystery by Jostein Gaarder (who wrote Sophie’s World, that I’d read earlier). I described this as full of philosophical ideas, a story within a story – fantasy/reality/philosophy – about a boy and his father travelling from Norway to Greece in search of the boy’s mother. A dwarf gives the boy a magnifying glass and a baker gives him a miniature book telling the story of a sailor shipwrecked on a desert island in 1790. There is also a pack of playing cards with lives of their own, including a Joker (his father collects Jokers). These are all things he needs to solve the mystery. Unlike Sophie’s World this doesn’t mention specific philosophers but discusses ideas about destiny, the supernatural, conincidences and the reality of the everday world.

I wouldn’t mind re-reading these books, even The Italian Girl!

5 thoughts on “This Time Five Years Ago”