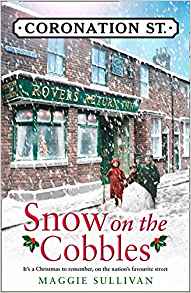 I’ve been watching Coronation Street for years so when I saw Snow on the Cobbles, a Coronation Street story on NetGalley described as ‘perfect for Coronation Street fans’ I requested it. It’s the third book in the Coronation Street series. It’s set in 1945 as the Second World War is coming to an end with some of the familiar Street characters – the main one being a young Hilda Ogden, with minor roles for others such as Elsie Tanner, Albert Tatlock, Ena Sharples and the young Ken Barlow. But there are also other characters who have never appeared in the TV soap.

The story centres around Hilda Ogden and new characters, Lizzie Doyle, her mother and her brothers, who have recently moved into No. 9 (currently  home to Tyrone Dobbs, his daughter Ruby Dobbs, Fiz Stape and her daughter Hope Stape).  Their new neighbour, Elsie Tanner, tells them that the house is said to have bad luck and they are worried about strange noises from the loft. Lizzie makes friends with Hilda when they both start working at the Pride of Weatherfield, a pub that had recently reopened in competition with the Rovers Return, where Annie Walker is in sole charge whilst her husband Jack is away at the war.

The story is of their daily lives, struggling to make ends meet and their joy and celebrations as the war comes to an end and the men return from the war. Lizzie, however, has a secret that threatens her relationship with Steve, the barman at the Rovers Return. And the new manager at the Pride of Weatherfield is involved in some very dodgy dealings.

I read it quickly and enjoyed it as I liked the setting and the historical details about the end of the war. I also liked the biography of Jean Alexander, who played the role of Hilda Ogden and I think Maggie Sullivan has captured the essence of Hilda in this book.

5 thoughts on “Snow on the Cobbles by Maggie Sullivan”