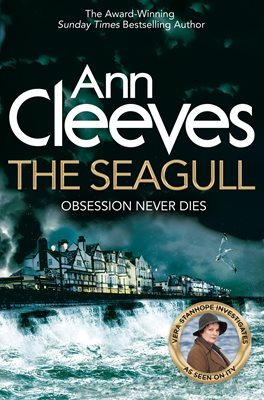 The Seagull is Ann Cleeves’ eighth novel in her Vera Stanhope series, set in Northumberland. It begins as Vera visits the prison where ex-Superintendent John Brace is serving time for corruption and his involvement in the death of a gamekeeper. He had been one of the so-called ‘Gang of Four’ – Brace, Robbie Marshall, a man known simply as ‘The Prof’, and Vera’s father, Hector Stanhope. Brace tells Vera that Robbie, who had disappeared years ago, is dead and that he will tell her where his body is buried if she will visit his daughter Pattie, who has mental health problems.  She does so, but when the police investigate the location Brace gave her they find not one skeleton, but two.

Opening up this cold case brings back memories for Vera of her past when she was living at home in a remote cottage in the Northumberland countryside, with Hector, after her mother had died.  The Gang of Four had met at Hector’s cottage when Vera was a teenager. They had traded in rare birds’ eggs and sold raptors from the wild for considerable sums. They were regulars at the (fictional) classy Seagull night club, a sleek Art Deco building built in the thirties in Whitley Bay,  during the town’s glory days. Brace and Marshall had also run a recruitment service providing muscle for hire. And Vera wonders just how much Hector had been involved in the Gang of Four’s illegal activities.

And just as Vera and her team, Joe, Charlie and Holly – Vera’s own ‘gang of four’ – investigate Robbie’s murder they are faced with a present day murder that looks very much as though it links in with their cold case.

I enjoy watching Vera on TV, but I enjoy the books even more. Brenda Blethyn is very good in the role of Vera, but the Vera in the books is not the same as the TV Vera – she is more down to earth, a large woman who wears tent-shaped dresses, has bare legs, wears size seven sandals with rubber soles and Velcro straps and she is none too fussy if her feet are dirty. She is a big woman with a big personality and she knows she is a brilliant detective:

‘Oh, I’m interested in everything, Joe. That’s why I’m a bloody brilliant detective’. She gave him her widest smile, ‘That’s why I’m in charge and you’re sitting there, doing as you’re told.’ (page 45)

She still lives in the cottage in the hills (not on Lindisfarne as in the TV series), which she had inherited from Hector along with a freezer full of animal corpses (Hector had done a bit of taxidermy), but most of the action takes place in Whitley Bay and at St Mary’s Island, a small rocky tidal island, linked to the mainland by a short, narrow causeway which is submerged at high tide.

I thoroughly enjoyed The Seagull and loved the way it reveals Vera’s past and her relationship with her father. At the same time the plot kept me guessing almost to the end and the location, well known to Ann Cleeves as it used to be her home town, is superbly described.

I see on Ann Cleeves’ website that ITV have confirmed that there will be a tenth series of VERA, based on Ann’s characters and settings and starring multi-award-winning Brenda Blethyn. The cast have been filming in the North East through the summer. Four new episodes will be broadcast in 2020.

And she has recently published a new  book, The Long Call, the first in a new series, Two Rivers. It is set in North Devon, where Ann grew up, and introduces the reserved and complex Detective Inspector Matthew Venn, estranged from the strict evangelical community in which he grew up, and from his own family, but drawn back by murder into the community he thought he had left behind.

The Long Call was published in Australia on 27th August, in the US on Tuesday 3rd September and in the UK on Thursday 5th September 2019.

10 thoughts on “The Seagull by Ann Cleeves”