Clouds of Witness by Dorothy L Sayers, is the second Lord Peter Wimsey book and one of my 20 Books of Summer. It was first published in 1926. My copy was reprinted in 1984 and I bought it secondhand four years ago. 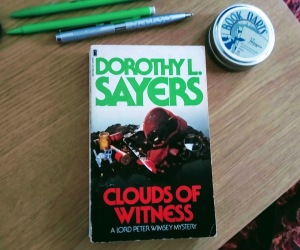 From the back cover of my paperback:

A man is found shot, and the Duke of Denver is charged with his murder. Naturally, it is his brother, Lord Peter Wimsey, who is called in to investigate the crime. This is a family affair, for the murdered man was the fiancé of the sister of Denver and Wimsey.

Why, then, does the Duke refuse to co-operate with the investigation? Is he really guilty, or is he covering up for someone? Why is Wimsey attacked by an enraged farmer on the lonely moors? Why is an attempt made on his life in a Soho street?

So many questions! And as I read even more popped into my mind – why did Lady Mary, Wimsey’s sister, leave the house at 3am on the morning of the murder? Why is she feigning illness? Whose footprints are those near the body of Denis Cathcourt (the murdered man)? What is the significance of the diamond cat charm with eyes of bright emeralds? And why won’t the Duke defend himself? Then there are the bloodstains and signs that the body had been dragged to the door of the conservatory where it was found, leading into the nearby thicket. If the Duke didn’t kill Cathcart who did and why?

The evidence against the Duke is circumstantial. So, Wimsey has his work cut out to prove his innocence and save him from the death penalty. Together with his friend, Inspector Charles Parker (who is in love with Lady Mary), and Bunter, his manservant, they look for clues and interview the family’s guests on the night of the murder. There are several strands to the story and minor characters who all manage to confuse the mystery.

There are some memorable scenes, such as Wimsey and Bunter’s escapade on the moors when they attempted to get to Grider’s Hole. The fog had come on them suddenly, blotting out their surroundings and they had no idea what direction to take. They strode forward gingerly unable to distinguish uphill from downhill – then Wimsey tripped into a bog, and found himself sinking up to his thighs. As well as struggling in the foggy bog, Wimsey also got shot and rather dramatically flew to New York in pursuit of evidence, a dangerous journey in a fragile plane as a deep depression was crossing the Atlantic bringing storms with heavy rain and sleet, rising to a gale as the plane lurched from gust to gust.

The trial scene in the House of Lords is fascinating:

The historic trial of the Duke of Denver for murder opened as soon as Parliament reassembled after the Christmas vacation. The papers had leaderettes on ‘Trial by his Peers’, by a Woman Barrister, and ‘The Privilege of Peers: should it be abolished?’ by a Student of History. The Evening Banner got into trouble for contempt by publishing an article entitled ‘The Silken Rope’ (by an Antiquarian), which was deemed to be prejudicial, and the Daily Trumpet – the Labour organ – inquired sarcastically why, when a peer was tried, the fun of seeing the show should be reserved to the few influential persons who could wangle tickets for the Royal Gallery. (pages 217 -218)

Clouds of Witness is a book of its time, there is much banter, wit and humour, and plenty of snobbery of all types clearly showing the class distinctions between the working and upper classes. It is a clever story, well told, with colourful characters and I liked the details it gives about Wimsey’s family as I’ve been reading these books totally out of order.

4 thoughts on “Clouds of Witness by Dorothy L Sayers”