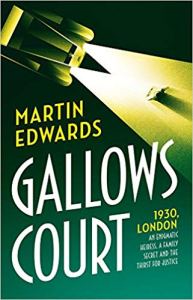 ‘Jacob Flint is watching the house again.’ The housekeeper’s voice rose. ‘Do you think he knows about …?’

‘I told you last night not to threaten me, Mr Flint. You should heed my advice. There are worse fates than the misfortune that befell Thomas Betts.’

London, 1930.
A headless corpse; an apparent suicide in a locked room; a man burned alive during an illusionist’s show in front of thousands of people. Scotland Yard is baffled by the sequence of ghastly murders unfolding across the city and at the centre of it all is mysterious heiress Rachel Savernake. Daughter of a grand judge, Rachel is as glamorous as she is elusive.

Jacob Flint, a tenacious young journalist eager to cover the gruesome crimes, is drawn into Rachel’s glittering world of wealth and power. But as the body count continues to rise, Jacob is convinced Rachel is harbouring a dark secret and he soon becomes part of a dangerous game that could leave him dancing at the end of the hangman’s rope if he pursues the truth.

I have high expectations of this book as I’ve thoroughly enjoyed all of Martin Edwards’s books that I’ve read, particularly his Lake District murder mysteries. Gallows Court has been on my radar since it was published last year so it’s time I read it, especially as now I see that his next book, due out in March next year, is to be Mortmain Hall, a sequel to Gallows Court.

5 thoughts on “My Friday Post: Gallows Court by Martin Edwards”