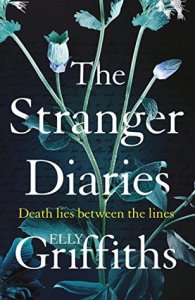 I knew very little about The Stranger Diaries before I opened the book beyond the fact that it is a standalone novel by Elly Griffiths, a murder mystery with a Victorian Gothic feel. It sounded different from her other books that I’ve read, so I was intrigued.

It begins with the opening of the Victorian Gothic writer R M Holland’s short story, The Stranger, a ghost story set at midnight at Halloween. Clare Cassidy, an English teacher at Talgarth High, where Holland once lived, runs short courses for adults on his work. She is also writing his biography, hoping to discover the truth behind the stories that his wife fell to her death down the stairs, (there are rumours that her ghost haunts the building). Was his wife killed, or was her death suicide or an accident? And was the mysterious ‘Mariana’ his daughter? There is no record of either her birth or her death.

But the main plotline is the modern mystery – that of the murder of Ella,her friend and fellow English teacher. A line, ‘Hell is empty!‘ from Holland’s story is found in a note beside her body. Ella, however, is only the first murder victim and gradually it becomes clear that the motivation for the killings centres around Clare. Is she a suspect or a potential victim? The story has three narrators, each one clearly distinguishable – Clare, her teenage daughter Georgia, and Detective Sergeant Harbinder Kaur, giving different perspectives on events. Excerpts from The Stranger are interspersed between the chapters along with Clare’s diary, in which she records her suspicions and fears that could hold the clue to the killings, and those about the police investigation.

Overall, I did enjoy The Stranger Diaries. I liked the literary references to Victorian literature and the details about R M Holland (a fictional character).  I thought the characters were interesting, especially Detective Sergeant Harbinder Kaur. But I didn’t find either the short story, The Stranger, or the atmospheric setting particularly spooky and I thought the murder mystery was rather unconvincing, especially the ending. Maybe my expectations were too high – or maybe it’s the wrong time of year to read it, and Halloween and November would be more appropriate!

7 thoughts on “The Stranger Diaries by Elly Griffiths”