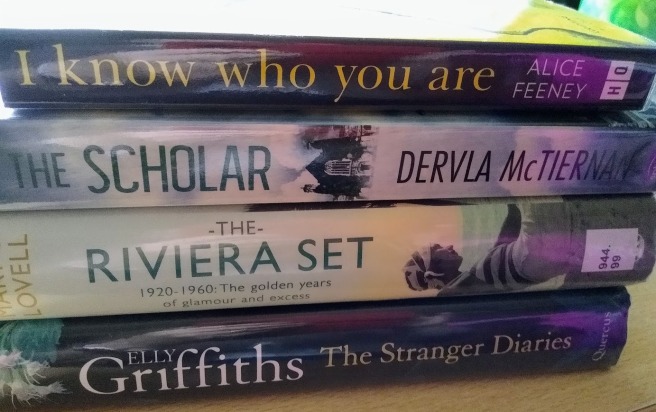 Why is it that when I reserved these four books at separate times over a period of months they all arrive within one week? And I now have only until the beginning of July in which to read them?  I have a feeling I won’t make it, so I hope no one else has reserved them …

I think I’d better start with I Know Who You Are or The Stranger Diaries, as I suspect other library members will have also reserved them.

I want to read I Know Who You Are by Alice Feeney as I loved her debut novel, Sometimes I Lie.

When Aimee comes home and discovers her husband is missing, she doesn’t seem to know what to do or how to act. The police think she’s hiding something and they’re right, she is – but perhaps not what they thought. Aimee has a secret she’s never shared, and yet, she suspects that someone knows.

The Stranger Diaries by Elly Griffiths is a standalone gothic thriller. Although I began by loving her Ruth Galloway books I’ve not read all of them, finding her use of the present tense jarring, but I’ve loved her Stephens and Mephisto books. I’m hoping The Stranger Diaries will be just as good.

Clare Cassidy is no stranger to murder. As a literature teacher specialising in the gothic writer RM Holland, she teaches a short course on it every year. Then Clare’s life and work collide tragically when one of her colleagues is found dead, a line from an RM Holland story by her body. The investigating police detective is convinced the writer’s works somehow hold the key to the case. Not knowing who to trust, and afraid that the killer is someone she knows, Clare confides her darkest suspicions and fears about the case to her journal. Then one day she notices some other writing in the diary – writing that isn’t hers.

I’m hoping I’ll be able to renew The Scholar by Dervla McTiernan and The Riviera Set by Mary S Lovell.

I reserved The Scholar after I finished reading The Ruin as I wanted to know more about Detective Cormac Reilly and his girlfriend, Emma.

When Emma stumbles across the victim of a hit and run early one morning, Cormac is first on the scene of a murder that would otherwise never have been assigned to him. The dead girl is carrying an ID, that of Carline Darcy, heir apparent to Darcy Therapeutics, Ireland’s most successful pharmaceutical company. Darcy Therapeutics has a finger in every pie, from sponsoring university research facilities to funding political parties to philanthropy – it has funded Emma’s own ground-breaking research. The investigation into Carline’s death promises to be high profile and high pressure. As Cormac investigates, evidence mounts that the death is linked to a Darcy laboratory and, increasingly, to Emma herself.

When I read Cath’s review of The Riviera Set: 1920 – 1960: The Golden Years of Glamour and Excess on her blog Read Warbler I thought it sounded fascinating, not really expecting it to be such a hefty tome. The library copy is a hardback and it weighs a ton!  It’s social history and I’m hoping it’ll be a nice change from crime fiction.

The Riviera Set is the story of the group of people who lived, partied, bed-hopped and politicked at the Château de l’Horizon near Cannes, over the course of forty years from the time when Coco Chanel made southern French tans fashionable in the twenties to the death of the playboy Prince Aly Khan in 1960. At the heart of this was the amazing Maxine Elliott, the daughter of a fisherman from Connecticut, who built the beautiful art deco Château and brought together the likes of Noel Coward, the Aga Khan, the Windsors and two very saucy courtesans, Doris Castlerosse and Daisy Fellowes, who set out to be dangerous distractions to Winston Churchill as he worked on his journalism and biographies during his ‘wilderness years’ in the thirties.

After the War the story continued as the Château changed hands and Prince Aly Khan used it to entertain the Hollywood set, as well as launch his seduction of and eventual marriage to Rita Hayworth.