Yesterday I realised that I should be reading The Kappillan of Malta by Nicholas Monsarrat in time for the next book club meeting, so I started reading it. 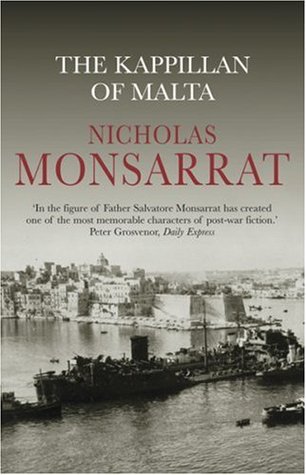 The man in the bar of the Phoenicia Hotel, by the main gate of Valletta, gave me more mis-information, in the space of two hours, than even six gins and tonics could really justify. He was a fattish, pinkish man in bulging blue shorts; a man on a long lazy holiday, but discontented none the less.

Father Salvatore had returned to his breviary, but the voices, with their burden of fear and despair  – a burden which, it must be said, often seemed wholly selfish, with a certain pleasurable interest in the blood of others added to it – came between him and the holy words, and he found himself listening instead of reading. What could be done with a crew like this?

Father Salvatore was a simple, lumbering priest, a Kappillan serving the poor Valetta, when war came out of the blue skies to pound the island to dust.

Now amid the catacombs discovered by a chance bomb, he cared for the flood of homeless, starving, frightened people who sought shelter from the death that fell unceasingly from the sky.

His story, and the story of Malta, is told in superbly graphic pictures of six days during the siege. Each of those days brought forth from the Kappillan a message of inspiration to keep them going – the legendary tales of six mighty events of Malta’s history which shone through the centuries and gathered them together in a fervent belief in their survival.

So far, I’m rather taken by this book with Monsarrat’s description of Malta – a place I’ve never visited.

16 thoughts on “My Friday Post: The Kappillan of Malta by Nicholas Monsarrat”