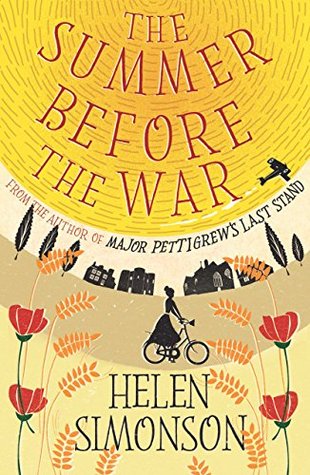 This is another short book review as I catch up with writing about my reading. The Summer Before the War by Helen Simonson is one of my TBR books. It is her second novel and I enjoyed it so much more than her first book, Major Pettigrew’s Last Stand. It’s the  summer of 1914, set in Rye in East Sussex when spinster Beatrice Nash arrived to teach Latin at the local grammar school. Her appointment was the result of Agatha Kent’s and Lady Emily Wheaton’s wish to have a female teacher as a Latin teacher.

This is really a book of two parts – the months before the outbreak of the First World War and then the events as the war got underway. It begins slowly with the first part describing the lazy, idyllic summer and in which all the characters are introduced. Although there is a clear distinction between the classes in society cracks are beginning to appear which will only widen as the century gets under way and the war acts as a catalyst for change..

But it really gets going in the second part when the young men sign up, including High and Daniel, Agatha’s nephews, and Snout one of Beatrice’s pupils. He was underage but his father, the local farrier, signed the papers agreeing he could enlist. Simonson doesn’t hold back on the horrific conditions under which the war took place and from a gentle beginning the book moves into a war novel, emotional and moving.

This book slots into the only reading challenge I’m doing this year – What’s in a Name 2018. It fits into two of the categories, The word ‘the’ used twice and A season. For the time being I’m putting it into the ‘season‘ category but may change that later if I read one of the other ‘season‘ books on my list.

8 thoughts on “The Summer Before the War by Helen Simonson”