This week The Light Between Oceans by M L Stedman, an author I haven’t come across before. I saw it in a pile of secondhand books for sale and the title caught my eye. 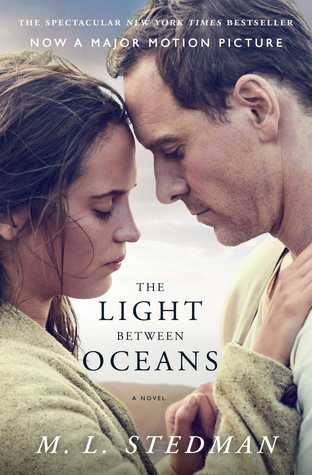 On the day of the miracle, Isabel was kneeling at the cliff’s edge, ending the small newly made driftwood cross. A single fat cloud snailed across the late-April sky, which stretched above the island in a mirror of the ocean below. Isabel sprinkled more water and patted down the soil around the rosemary bush she had just planted.

‘… and lead us not into temptation, but deliver us from evil,’ she whispered.

For just a moment, her mind tricked her into hearing an infant’s cry. She dismissed the illusion, her eye drawn instead by a pod of whales weaving their way up the coast to calve in the warmer waters, emerging now and again with a fluke of their tails like needles through tapestry. She heard the cry again, louder this time on the early morning breeze. Impossible.

A boat washes up on the shore of a remote lighthouse keeper’s island. It holds a dead man and a crying baby. the only two islanders, Tom and his wife Izzy, are about to make a devastating decision.

They break the rules and follow their hearts. What happens next will break yours.

It’s been made into a film and looks a real weepie, again I hadn’t heard of the film either, starring Michael Fassbender and Alicia Vikander. The Guardian calls it a ‘swirling, sugar-coated melodrama, a tale of love and sacrifice that isn’t afraid to hit cymbal-crashing levels of sentimentality.’

It looks a complete change of reading for me!