This week’s first paragraph is from The Dry  by Jane Harper, her debut novel, which has received many accolades and is shortlisted for the CWA Gold Dagger award. The Gold Dagger is awarded to the best crime novel of the year. 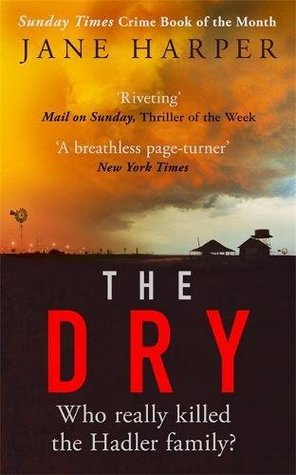 It wasn’t as though the farm hadn’t seen death before, and the blow flies didn’t discriminate. To them there was little difference between a carcass and a corpse.

The drought had left the flies spoiled for choice that summer. They sought out unblinking eyes and sticky wounds as the farmers of Kierwarra levelled their rifles at skinny livestock. No rain meant no feed. And no feed made for difficult decisions as the tiny town shimmered under day after day of burning blue sky.

Even those who didn’t darken the door of the church from one Christmas to the next could tell there would be more mourners than there were seats. A bottleneck of black and grey was already forming at the entrance as Aaron Falk drove up, trailing a cloud of dust and cracked leaves.

WHO REALLY KILLED THE HADLER FAMILY?

Amid the worst drought to ravage Australia in a century, it hasn’t rained in small country town Kiewarra for two years. Tensions in the community become unbearable when three members of the Hadler family are brutally murdered. Everyone thinks Luke Hadler, who committed suicide after slaughtering his wife and six-year-old son, is guilty.

Policeman Aaron Falk returns to the town of his youth for the funeral of his childhood best friend, and is unwillingly drawn into the investigation. As questions mount and suspicion spreads through the town, Falk is forced to confront the community that rejected him twenty years earlier. Because Falk and Luke Hadler shared a secret, one which Luke’s death threatens to unearth. And as Falk probes deeper into the killings, secrets from his past and why he left home bubble to the surface as he questions the truth of his friend’s crime.

It’s not only shortlisted for the CWA Gold Dagger it has also received:

When a book receives so much praise I’m sometimes sceptical and avoid a book for a while at least. But with The Dry I think that I’d just be sticking my head in the sand. I’ll be reading it very soon.