This week’s first paragraph is from An Artist of the Floating World by Kazuo Ishiguro, who has been awarded this year’s Nobel Prize for Literature. 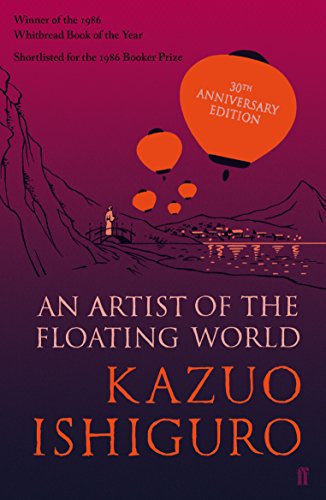 If on a sunny day you climb the steep path leading from the little wooden bridge still referred to around here as ‘the Bridge of Hesitation’ you will not have  to walk far before the roof of my house becomes visible between the tops of two gingko trees. Even if it did not occupy such a commanding position on the hill, the house would still stand out from all others nearby, so that as you come up the path, you may find yourself wondering what sort of wealthy man owns it.

It is 1948. Japan is rebuilding her cities after the calamity of World War Two, her people putting defeat behind them and looking to the future. The celebrated artist, Masuji Ono, fills his days attending to his garden, his house repairs, his two grown daughters and his grandson; his evenings drinking with old associates in quiet lantern-lit bars. His should be a tranquil retirement. But as his memories continually return to the past – to a life and career deeply touched by the rise of Japanese militarism – a dark shadow begins to grow over his serenity.

There are some books that draw me in right from the beginning – and this is one of them. I’m hoping it lives up to its promise. I like the way Ishiguro paints a picture setting the scene in my mind as though I’m standing there looking at the view.

10 thoughts on “First Chapter First Paragraph: An Artist of the Floating World”