A Darker Domain by Val McDermid 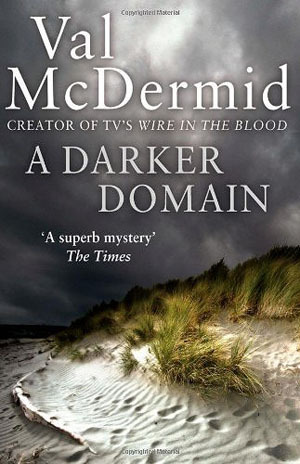 This is the second book in Val McDermid’s Kate Pirie series, a series that really should be read in order as A Darker Domain reveals one of the outcomes of the first book, The Distant Echo.

The first thing that struck me when I began reading this book is that is not divided into chapters. Instead the text is divided by date and place, which initially is a bit confusing, moving between the two cases Karen is investigating. However, I soon got the hang of it.

I like the mix of fact and fiction in A Darker Domain, using the Miners’ Strike as the backdrop to the mystery of Mick Prentice’s disappearance. It is intricately plotted, with a large cast of characters and it’s deceptively easy to read – it’s easy to pass over significant facts that you realise later are of importance.

I like Karen Pirie, who had been a Detective Constable in the second part of the first book, The Distant Echo. Now she is a Detective Inspector in charge of the Cold Case Review Team in Fife. She describes herself as

a wee fat woman crammed into a Marks and Spencer suit, mid-brown hair needing a visit to he hairdresser, might be pretty if you could see the definition of her bones under the flesh. (page 6)

In the tradition of fictional detectives she’s an independent character, who takes little notice of her ineffectual boss, who she nicknames the ‘Macaroon’, undermining his authority. But she is hard-working and tenacious.

I like the contrasts Val McDermid portrays, such as the ‘darker domain‘ of the miners’ lives, the rich landowner wanting to find his grandson, and the beautiful setting in Tuscany where the members of a troupe of puppeteers, are squatting in a ruined villa.

I also like the mix of the two cases, which, as this is crime fiction, I fully expected would at some point interlink. The question is how do they interlink? Val McDermid has a neat way of leading you along the wrong lines with her twists and turns, culminating in the final paragraph. But the ending seemed rushed, tacked on, almost as an afterthought, which left me bemused and feeling rather flat. So, not as good as The Distant Echo but still an entertaining book.

I hope to read the next book in the series, The Skeleton Road, before the end of the year.