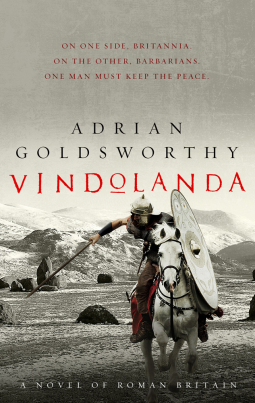 AD 98: The bustling army base at Vindolanda lies on the northern frontier of Britannia and the entire Roman world. In twenty years’ time, the Emperor Hadrian will build his famous wall, but for now defences are weak, as tribes rebel against Roman rule, and local druids preach the fiery destruction of the invaders.

Flavius Ferox is a Briton and a Roman centurion, given the task of keeping the peace on this wild frontier. But it will take more than just courage to survive life in Roman Britain…

I was quickly drawn into Vindolanda by Adrian Goldsworthy, a novel set in northern frontier of Britain in 98 AD. It’s full of historical detail. Whilst some characters are based on real people about whom little is known apart from their names, most of the characters are fictional, including the main character, centurion Flavius Ferox.  He is based at a small fort called Syracuse (a fictional fort) near the garrison of Vindolanda (modern Chesterholm). Vindolanda is south of Hadrian’s Wall and predates its construction.

The story begins with the arrival of Vindex, the head of the native scouts and a minor son of a chieftain of the Brigantes tribe, who announces that there is a force of at least sixty barbarians in the area planning an attack on the road to Coria (modern day Corbridge). He needs Ferox’s help in hunting these marauders. This is just the start of a series of skirmishes, ambushes and full scale battles. There is at least one traitor in the Roman army informing the tribes of the army’s movements and Ferox is charged with finding out who it is.

I enjoyed reading Vindolanda and the insight it gives into the early period of British history. Adrian Goldsworthy’s Historical Note at the end of the book is excellent, explaining just what is fictional and what is fact in his novel. After Boudicca’s defeat in AD 60 there was little resistance to the Romans in southern Britain, but it was different in northern Britain where there were frequent outbursts of violence, raids and warfare.

There are sections in the Historical Note about the Roman army describing its structure and tactics, on the period before the construction of Hadrian’s Wall, on tribes and druids. The most interesting section for me is the one on Vindolanda and the Writing Tablets found there. These are wooden tablets written in ink on thin sheets of wood. Hundreds of them have survived, most are mundane containing details of daily life, letters, accounts and give an idea about the food they ate and of the social life of the commanders and their families. Among them are details about the commanding officer around AD 98, the Prefect Flavius Cerialis and his wife, Sulpicia Lepidina, both of whom are major characters in the novel.

Vindolanda is a most enjoyable and informative book. I have just one criticism of it, which is purely personal because my eyes always glaze over during battle scenes (both in books and on screen) and in this book there is just too much detail about the battles for me interrupting the storyline, even though the scenes are graphic and fast-paced.

My thanks for the advance review copy I received courtesy of NetGalley and the publishers, Head of Zeus.

Adrian Goldsworthy has a doctorate from Oxford University. His first book, THE ROMAN ARMY AT WAR was recognised by John Keegan as an exceptionally impressive work, original in treatment and impressive in style. He has gone on to write several other books, including THE FALL OF THE WEST, CAESAR, IN THE NAME OF ROME, CANNAE and ROMAN WARFARE, which have sold more than a quarter of a million copies and been translated into more than a dozen languages. A full-time author, he regularly contributes to TV documentaries on Roman themes.

3 thoughts on “Vindolanda by Adrian Goldsworthy”