A murder scene, but where’s the body? 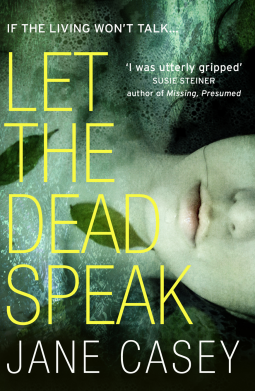 The first book in Jane Casey’s Maeve Kerrigan series was The Burning, published in 2010, but I didn’t get round to reading it until February 2015. I was hooked immediately and read the next five books in quick succession by the end of August 2015. These are all police procedurals, fast-paced novels, with intriguing and complex plots and developing the relationships between the main characters. So, I think that although the books read well as stand-alones, it helps enormously to read them in order.

Let the Dead Speak  is the seventh Maeve Kerrigan book (published today, 9 March 2017 ) and it is no less intriguing and complex than the earlier books. I loved it.

When eighteen-year-old Chloe Emery returns to her West London home she finds Kate, her mother, missing and the house covered in blood. There may not be a body, but everything else points to murder. Maeve Kerrigan is young, ambitious and determined to prove she’s up to her new role as detective sergeant.

In the absence of a body, she and maverick detective Josh Derwent turn their attention to the neighbours. The ultra-religious Norrises are acting suspiciously; their teenage daughter definitely has something to hide.

Then there’s William Turner, once accused of stabbing a schoolmate and the neighbourhood’s favourite criminal. Is he merely a scapegoat or is there more behind the charismatic facade?

As the accusations fly, Maeve must piece together a patchwork of conflicting testimonies, none of which quite add up. Who is lying, who is not? The answer could lead them to the truth about Kate Emery, and save the life of someone else.

Let the Dead Speak continues to develop the detectives’ personal lives as well as detailing the investigations into Kate Emery’s disappearance. Maeve has been promoted and is now a detective sergeant (a long over-due promotion I think) and the murder investigation team has a new member, DC Georgia Shaw, a graduate on a fast-track scheme. Maeve finds her rather irritating. DI Josh Derwent is still her boss and neither he nor Maeve stick to the rules, but act independently as they see fit. The chemistry between the two of them is still there and is still full of undercurrents. DCI Una Burt is acting up as their Superintendent and the working relationship between her and Maeve is now improving.

There are several strands to the investigation – first of all if Kate was killed where is her body and who had the motive and opportunity to kill her? If she was not killed why is there so much blood in the house, whose blood is it, and where is Kate?

I enjoyed the fast-paced action, the interaction between the characters, both the police and the other characters. Chloe, who is very shy and lacking in confidence as well as in social skills is of little help in discovering what has happened to her mother. I liked the portrayal of the Norris family, Bethany and her parents and uncle, who are all members of an evangelical church, the Church of the Modern Apostles. Bethany refuses to answer Maeve’s questions and is openly hostile. Then there is the local ‘bad boy’ William Turner – what is his involvement? Similarly are Chloe’s father and stepmother and her step-brothers responsible in any way?

I kept changing my mind about what had happened and who was the guilty party, but it had me foxed. And then when I had it worked it out the last chapter surprised me yet again with the twist at the end. Maeve Kerrigan really is an excellent detective.

Thanks to the publishers via NetGalley for my copy.

The earlier books in the series are

4 thoughts on “Let the Dead Speak by Jane Casey”