This month’s chain begins with: 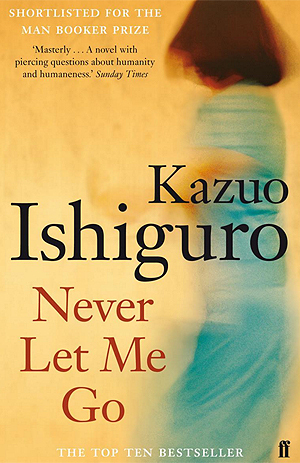 When I read Never Let Me Go by Kazuo Ishiguro in 2006 I thought it was very chilling and disturbing in its implications. I didn’t know what it was all about before I read it, so when I realised it quite took my breath away. I noted this quotation ‘… you’ve been told and not been told.’ And as I don’t want to give away the plot all I’m saying is that this book is about love, friendship and memory.

My first book is another book by  Kazuo Ishiguro, The Remains of the Day, a book that I liked much more than Never Let Me Go. I read it years ago and have also seen the film of the book, with Anthony Hopkins as Stevens, the aging butler at Darlington Hall, looking back on his life. It’s a sad and moving book about life between the two World Wars. Stevens reminisces about his relationship with Darlington Hall’s housekeeper, Miss Kenton and his unspoken feelings for her.

Another book with the word ‘day’ in the title is The Day of the Lie by William Broderick. This is the fourth of his Father Anselm books – a series I love, although this is not my favourite book of the series. It is set in post-Second World War Poland, covering  the early 1950s, the early 1980s and the present day. Father Anselm’s old friend John has asked him to investigate who had betrayed  Roza Mojeska. She had been part of an underground resistance movement, had been arrested and tortured by the secret police. Like his other books this is a complicated and layered book, delving into the past, uncovering secrets and revealing crimes.

Schindler’s List by Thomas Keneally is also set in Poland – Nazi-occupied Poland during the Second World War. I haven’t read this book yet, although I have watched the film directed by Steven Spielberg more than once. It’s an unforgettable story, all the more extraordinary for being true. Oskar Schindler, a German business man risked his life to protect and save the lives of more than a thousand Jews. The book based on numerous eyewitness accounts. It won the Booker Prize in 1982.

The Secret River by Kate Grenville was  shortlisted for the Booker Prize in 2006. It completely captivated me when I read it in 2012. It’s historical fiction  following the life of William Thornhill from his childhood in the slums of London to Australia. He was a Thames waterman transported for stealing timber in 1806. It’s about his struggle for survival after he was pardoned and became a waterman on the Hawkesbury River and then a settler with his own land and servants. It’s beautifully written and raises several issues ‘“ about crime and punishment, about landownership, defence of property, power, class and colonisation.

Another book set in Australia, but this time in the present day is Standing Water by Terri Armstrong. It’s a fascinating story set in and near the fictional town of Marrup in the Western Australia Wheatbelt, an area suffering from drought ‘“ there’s been no rain for a couple of years. I was completely engrossed in this book, which is about friendships, sibling rivalry, parent/child relationships, and love and betrayal. The characters are convincing and the setting is superb. I could feel the heat, see the landscape, the farms, the plants, birds and the Dog Rock, a huge rock overlooking a panorama of flat land below its sixty foot height, with tiny caves at its base.

Which leads me to A Fear of Dark Water by Craig Russell, the last link in the chain. The water in this book is the result of a massive storm that hit Hamburg, flooding the city, just as a major environmental summit is about to start. This is crime fiction – a serial rapist and murderer is still at large in the city and when the flood waters recede a headless torso is found washed up. I thoroughly enjoyed this fast paced and complex, multi-layered crime novel that kept me guessing right to the end.

16 thoughts on “Six Degrees of Separation: From Never Let Me Go to A Fear of Dark Water”