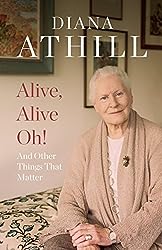 One of the books I’ll be reading soon is Alive, Alive Oh! And Other Things That Matter by Diana Athill OBE. From what I’ve read so far it promises to be very interesting. Born in 1917 Diana Athill helped Andre Deutsch establish his publishing company and worked as a literary editor for many years. She is also a novelist and has published several memoirs.

Alive, Alive Oh! And Other Things That Matter begins:

‘Sometimes I sits and thinks and sometimes I just sits’: I have forgotten who it is who is supposed to have said that, but it is a good description of a state quite often observed in a retirement home, and considered pitiable. Disconcertingly, I recently realized that I myself (not very often, just now and then) might say those very words if somebody asked me what I was doing. It is not a welcome thought, but less dreadful than it might be because I now know from experience that the state is not necessarily pitiable at all. It is even pleasant – or it can be. That probably depends on the nature of the person sitting. To me it has been, because the thinking turns out to be about events in the past which were enjoyable, and when the mind relaxes itself it is those same events which float in and out of it.

What matters in the end? In the final years of life, which memories stand out? Writing from her retirement home in Highgate, London, as she approaches her 100th year, Diana Athill reflects on what it is like to be in her nineties, and on the moments in her life which have risen to the surface and sustain her in her later years.

She recalls in sparkling detail the exact layout of the garden of her childhood, a vast and beautiful park attached to a large house, and writes with humour, clarity and honesty about her experiences of the First and Second World Wars, and her trips to Europe as a young woman. In the remarkable title chapter, Athill describes her pregnancy at the age of forty-three, losing the baby and almost losing her life, and her gratitude on discovering that she had survived.

With vivid memories of the past mingled with candid, wise and often very funny reflections on the experience of being very old, Alive, Alive Oh! reminds us of the joy and richness to be found at every stage of life.

Teaser Tuesday is a weekly bookish meme, hosted by MizB of Books and a Beat. ! Just do the following:

It annoys me when someone describes this country in the late 1940s and 1950s as being dreary, an opinion usually based on the continuation of rationing for some years after the war’s end. People who see it like that can’t have lived through the war. Those of us still alive who did so see it differently.