When I was asked if I would read and review a revised edition of The Monocled Mutineer by John Fairley and William Allison, the book on which the 1986 BBC TV series was based I was immediately interested as I had watched the TV series. 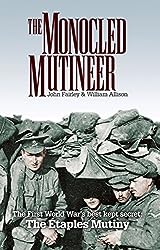 Description from the Press Release:

In 1917 British, New Zealand and Australian troops stationed at the Ã‰taples Training Camp in northern France protested against the inhuman conditions and the protest erupted into mutiny. Private Percy Toplis was named by the authorities as a leader of this mutiny. While several of the mutineers were executed in its aftermath, Toplis escaped and remained at large for three years. The Army immediately covered up the mutiny, thousands of the participants died shortly afterwards in the Passchendaele offensive while the survivors remained silent for over fifty years. After three years as Britain’s most wanted man Percy Toplis was killed in 1920 by a policeman.

This is the 2nd and updated edition of The Monocled Mutineer, which  includes a new introduction and epilogue that expand on newly discovered information about the events of the mutiny and the government’s response to it. It is primarily based on interviews and correspondence with survivors of the First World War nearly sixty years after the events they describe. In 1976 the authors advertised in newspapers asking whether any veterans from the First World War had recollections of the events in Ã‰taples in September 1917. They received many replies containing:

… sharp, bitter accounts of events long ago, but far from forgotten. Inevitably they were careful handwritten stories in old men’s script, teased out without any other prompting than the brief enquiry in their local paper. (page 2)

In addition to the anecdotal evidence the authors have used other sources including the published personal reminiscences of Edwin Woodhall,  Detective and Service Days and Lady Angela Forbes. Memories and Base Details; journalists’ accounts in various periodicals; and have drawn background material from records about the First World War in the  Imperial War Museum, The Public Record Office and the British Newspaper Library.

Not many contemporary records have survived that relate to the mutiny. One of the surviving records is the war diary of the Commandant at the Ã‰taples Camp,  Brigadier-General Andrew Graham Thomson. Thompson describes what happened as a ‘disturbance’ and as ‘riots’ and ‘breakouts’:

Disturbance in Reinforcement Camp between military police and troops, Corporal Wood, 4th Gordons being accidentally shot … a crowd of about 1,000 gathered at Ã‰taples town, and about 7.30 pm tried to break into the Sevigne cafe where two policemen were hiding. (page 1)

But in 1978, after the publication of the 1st edition and the BBC dramatisation, the British government admitted that the events that took place at Ã‰taples had been a mutiny and also that  it was probable that the records relating to the board of inquiry into the events had been destroyed many years ago. The files on the mutiny and Percy Toplis’ military records are closed until 2017.

Historical accuracy is never easy to obtain, especially where records have been lost and where there is a limited number of sources to compare one against the other. In this case the main sources of information are the personal accounts from the veterans as they remembered them many years later.

And the picture they paint is a most remarkable and shocking one of the brutal and inhuman conditions which were in operation at the camp. As for Toplis’ part in the mutiny, the letters from the veterans occasionally mentioned him and whilst some thought he was the main ringleader, few thought he was the only one, but that there were a number of soldiers involved. One remembered Toplis’ name on a wanted poster and wrote:

If he was a villain then he was not the only one around Ã‰taples. Maybe he too was tired of being humiliated, deprived, brutalized and treated like a dog. We had all got tired of being treated with less consideration than that given to horses. (page 91)

Another reported that Toplis, heading a mob of about 1,000 deserters confronted Thompson, surrounding his car. Toplis climbed on the running board and dictated the terms for ending the mutiny (page 93). After the mutiny ended, whilst some of the ringleaders were executed, Toplis escaped. Others were killed in the battle for Passchendale which began on 20th September.

Maybe more information will be available in 2017 when the files are opened and a fuller picture of what happened will emerge.

The Monocled Mutineer also goes into detail about Percy Toplis’ life before and after the war. Coming from a working-class background, by the age of eleven he was already a con artist and a thief. He must have been a charismatic character, able to both charm and deceive people, successfully impersonating officers, able to melt into the background deserting and then rejoining the army seemingly at will, not sentenced to execution by the firing squad (the penalty for desertion). But after the war ended in 1920 his luck ran out as he was accused of murdering a taxi-driver. The inquest held that he was guilty in his absence. Toplis fled, evading capture for six weeks and he was eventually shot down in a police ambush near Plumpton in Cumberland.

4 thoughts on “The Monocled Mutineer by John Fairley & William Allison”