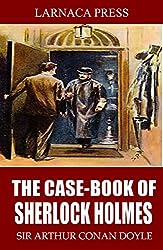 The Case-Book of Sherlock Holmes contains twelve short stories first published between 1921 and 1927. In the Preface Conan Doyle  wrote that he hoped his Sherlock Holmes stories had provided

that distraction from the worries of life and stimulating change of thought that can only be found in the fairy kingdom of romance.

In this post I’m only writing about three of them for The 1924 Club; stories that were first published in 1924 (for more details about The I924 Club click on this link). They do indeed, provide both a distraction and a stimulating change of thought. The narrator in these three stories is Dr Watson.

The Adventure of the Sussex Vampire – this was first published in the January 1924 issues of The Strand Magazine in London and Hearst’s International Magazine in New York.

As Sherlock Holmes says when he first heard about a case concerning vampires,‘we seem to have been switched on to a Grimm’s fairy tale.‘ He tells Watson they cannot take it seriously:

Rubbish Watson, rubbish! What have we to do with walking corpses who can only be held in their grave by stakes driven through their hearts? It’s pure lunacy!

But he takes on the case for two reasons – one, he’s interested in the house in Essex belonging to Mr Ferguson where his wife is suspected of being a vampire, and two, Ferguson had known Watson when they played rugby together for Blackheath. His Peruvian wife had been seen attacking his son from a previous marriage and also leaning over her own baby and biting his neck. She refused to explain herself. Holmes solves the mystery, indeed he had reached his conclusion even before arrived in at the house, based on his conviction that the idea of a vampire was absurd. I enjoyed this tale, mainly because Holmes used logic and deduction in coming to his conclusion, overriding the supernatural.

The Adventure of the Three Garridebs – first published in October 1924 in Collier’s Weekly and then in The Strand Magazine in January 1925.

I think this is a rather strange and artificial story, Dr Watson says it may have been a comedy or a tragedy. It led to him being shot in the leg and yet there was certainly an element of comedy. It’s about a man with the unusual name of Garridebs, ostensibly looking for two other men with the same name  to inherit five  million dollars each. Of course, that is not his real reason and the man is none other than a  known murderer.  It shows, however, the depth of Holmes’ feeling for Watson, as he says:

It was worth a wound – it was worth many wounds – to know the depth of loyalty and love which lay behind that cold mask. The clear, hard eyes were dimmed for a moment, and the firm lips were shaken. For the one and only time I caught a glimpse of a great heart as well as of a great brain. All my years of service culminated in that moment of revelation.

It’s in this story too that Watson reveals that Holmes had refused a knighthood.

The Adventure of the Illustrious Client – first published in Collier’s Weekly in November 1924.

At the request of an unnamed but illustrious client, Holmes and Watson investigate the case concerning Violet de Merville, young, rich and beautiful who has fallen under the spell of the notorious Baron Gruner. Her father, General de Merville wants to prevent them from marrying.  Gruner is known as a violent murderer and Holmes is keen to meet a man who may be more dangerous even than the late Professor Moriarty. But he has to enlist the help of one of Gruner’s past mistresses to open Violet’s eyes to the true nature of the man she thought she loved.

I like the personal touches in this story, the opening scene for example shows Holmes and Watson in the drying-room of a Turkish Bath, lying in an isolated corner on two couches, side by side, smoking in a state of lassitude. Watson says that it is where he finds Holmes less reticent and more human than anywhere else. Watson knows that although he was nearer to Holmes than anyone else he was always conscious of the gap between them – Holmes leaves his closest friend guessing what his exact plans may be.

These three stories all illustrate Holmes’ deductive powers and seemingly cold nature but also reveal the depth of feeling between him and Watson. Bur I’m not sure that they reflect anything in particular about what was being published in 1924.

I shall write about the remaining stories in the Case-Book at a later date.