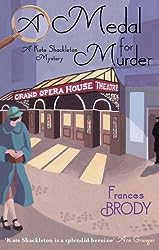 3 thoughts on “A Medal for Murder by Frances Brody”