I noticed trailers for a new drama on BBC for The Outcast and wondered if it’s based on the book of the same name by Sadie Jones ‘“ a book that has sat on my shelves for a few years (well nearly 7 years) and I still haven’t read it. That’s what happens when you move house, box the books and then double shelve them, putting this one at the back! It was shortlisted for the Orange Broadband Prize for Fiction in 2008. 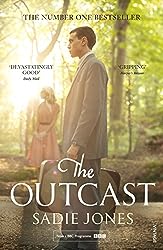 And it is the same book (although my copy being much older has a different cover) ‘“ the TV version begins tomorrow on BBC One at 9 pm. It’s been adapted by Sadie Jones, so I hope this means it’s faithful to the book. I’ve started to read it ‘“ won’t finish it by tomorrow night but will definitely finish it before the second episode is broadcast the following Sunday.

It’s set in the 1950s, when Lewis Aldridge aged nineteen, is released from jail, and returns to the village where he grew up: the village where, a decade earlier, tragedy tore his family apart, leaving him to a troubled adolescence with a father he barely knew.

6 thoughts on “The Outcast by Sadie Jones”