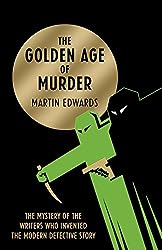 I’m currently reading The Golden Age of Murder by Martin Edwards, described on the back cover as

‘the extraordinary story of British detective fiction between the two World Wars, and the fascinating people who wrote it. A gripping real-life detective story, this book investigates how Agatha Christie and her colleagues in the mysterious Detection Club transformed crime fiction. Their work cast new light on unsolved murders, whilst hiding clues to their authors’ darkest secrets, and their complex and sometimes bizarre private lives.

Chapter I, The Ritual in the Dark

On a summer evening in 1937, a group of men and women gathered in the darkness to perform a macabre ceremony. They had invited a special guest to witness their ceremony. She was visiting London from New Zealand and a thrill of excitement ran through her as the appointed time drew near. She loved drama, and at home she worked in the theatre. Now she felt as tense as when the curtain was about to rise. To be a guest at this dinner was a special honour. What would happen next she could not imagine.

Many congratulations to Martin Edwards who is to be the next President of  the Detection Club when Simon Brett, the current President retires in November. I really cannot think of a better choice than Martin, a well-deserved honour indeed!