Now: I’m still making slow progress with the two non fiction books I started a few weeks ago. I like to take time with these as there is so much information to take in.

They are The Golden Age of Murder by Martin Edwards ‘“ the story of detective fiction written by the authors in the Detection Club between the two World Wars.

And Stephen Hawking: His Life and Work – it’s the science that’s slowly me down considerably in this, but it is really fascinating. I’m looking forward to watching Stephen Hawking’s interview with Dara O Briain, which  was broadcast last night on BBC1. It was on a bit late, so we’ve recorded it.

I’ve recently started The Secret Keeper by Kate Morton, which I am loving so far.

The Secret Keeper, is a spellbinding story of mysteries and secrets, murder and enduring love, moving between the 1930s, the 1960s and the present.
1961: On a sweltering summer’s day, while her family picnics by the stream on their Suffolk farm, sixteen-year-old Laurel hides out in her childhood tree house dreaming of a boy called Billy, a move to London, and the bright future she can’t wait to seize. But before the idyllic afternoon is over, Laurel will have witnessed a shocking crime that changes everything.
2011: Now a much-loved actress, Laurel finds herself overwhelmed by shades of the past. Haunted by memories, and the mystery of what she saw that day, she returns to her family home and begins to piece together a secret history. A tale of three strangers from vastly different worlds – Dorothy, Vivien and Jimmy – who are brought together by chance in wartime London and whose lives become fiercely and fatefully entwined.

I have recently finished A Game For All The Family by Sophie Hannah which I’m not sure about at all. It’s weird and has been occupying my mind for the last few days. My review will follow shortly when I’ve sorted out what I make of it.

Justine thought she knew who she was, until an anonymous caller seemed to know better’¦ After escaping London and a career that nearly destroyed her, Justine plans to spend her days doing as little as possible in her beautiful home in Devon.

But soon after the move, her daughter Ellen starts to withdraw when her new best friend, George, is unfairly expelled from school. Justine begs the head teacher to reconsider, only to be told that nobody’s been expelled ‘“ there is, and was, no George.

Then the anonymous calls start: a stranger, making threats that suggest she and Justine share a traumatic past and a guilty secret ‘“ yet Justine doesn’t recognise her voice. When the caller starts to talk about three graves ‘“ two big and one small, to fit a child ‘“ Justine fears for her family’s safety. If the police can’t help, she’ll have to eliminate the danger herself, but first she must work out who she’s supposed to be’¦

I’m never sure what I’ll read next. I’d like to read so many, but I’m thinking of reading a few of Agatha Christie’s Parker Pyne stories that I wrote about in my last post. It will fit in nicely with reading The Golden Age of Murder! 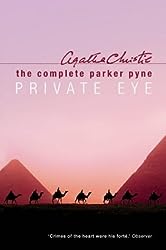