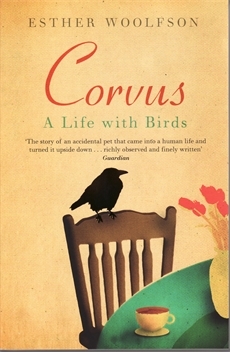 Corvus by Esther Woolfson is a remarkable book about the birds she has has had living with her; birds that were found out of the nest that would not have survived if she had not taken them in.

‘Corvus’ is a genus of birds including jackdaws, ravens, crows, magpies and rooks. The specific birds Esther Woolfson has looked after are a rook, called Chicken (short for Madame Chickieboumskaya), a young crow, a cockatiel, a magpie, two small parrots and two canaries. But it all started with doves, which live in an outhouse, converted from a coal store into a dove-house, or as they live in Aberdeen in Scotland, a doo’cot.

Although the book is mainly about the rook, Chicken, Esther Woolfson also writes in detail about natural history, the desirability or otherwise of keeping birds, and a plethora of facts about birds, their physiology, mechanics of flight, bird song and so on. As with all good non-fiction Corvus has an extensive index, which gives a good idea of the scope of the book. Here are just a few entries for example under ‘birds’ the entries include – aggression in, evolution of, navigation, in poetry, speeds of, vision, wildness of, wings’…

It’s part memoir and part nature study and for me it works best when Esther Woolfson is writing about Chicken and the other birds living in her house, how she fed them, cleared up after them, and tried to understand them. Although at times I had that feeling I get when I visit a zoo – these are wild birds kept captivity and I’m not very comfortable with that, I am reassured by Esther Woolfson’s clarification that reintroducing these birds to the wild was unlikely to be successful and indeed they lived longer than they would have done in the wild. Though Chicken and Spike (and the other birds) live domesticated lives they are still wild birds:

I realise that if ‘wild’ was once the word for Chicken, it still is, for nothing in her or about her contains any of the suggestions hinted at by the word ‘tame’. Chicken, Spike, Max, all the birds I have known over the years, live or lived their lives as they did by necessity or otherwise, but were and are not ‘tame’. They are afraid of the things they always were, of which their fellow corvids are, judiciously, sensibly; of some people, of hands and perceived danger, of cats and hawks, of things they do not know and things of which I too am afraid. ‘Not tamed or diminished’. (pages 115-6)

At times, where Esther Woolfson goes into intricate detail, for example in the chapter on ‘Of Flight and Feathers‘ I soon became completely out of my depth, lost in the infinity of specialised wing shapes and the complexities of the structure of feathers. But that is a minor criticism, far out weighed by her acute observations of the birds, her joy in their lives and her grief at their deaths – her description of Spike’s unexpected death and her reaction is so moving:

I wept the night he died. Sitting in bed, filled with the utter loss of his person, I felt diminished, bereft. I talked about him, but not very much, in the main to members of the family, who felt the same, but to few others.

It’s the only way, this compact and measured grief, for those of us who are aware that there has to be proportion in loss and mourning; we laugh at ourselves for our grief, trying to deal with this feeling that is different in quality, incomparable with the loss of a human being.

We felt – we knew – that something immeasurable had gone. (page 209)

Anyone who has lived through the death of a loved animal can recognise that sense of loss.

Corvus is a beautiful book and I have learned so much by reading it. I must also mention the beautiful black and white illustrations by Helen Macdonald – I think this is the Helen Macdonald who was awarded the 2014 Samuel Johnson Prize for Non-Fiction for H is For Hawk.

Esther Woolfson was brought up in Glasgow and studied Chinese at the Hebrew University of Jerusalem and Edinburgh University. Her acclaimed short stories have appeared in many anthologies and have been read on Radio 4. She has won prizes for both her stories and her nature writing and has been the recipient of a Scottish Arts Council Travel Grant and a Writer’s Bursary. Her latest book, Field Notes from a Hidden City (Granta Books), was shortlisted for the 2014 Thwaites Wainwright Prize for Nature and Travel Writing. She lives in Aberdeen. For more information see her website.

2 thoughts on “Corvus: A Life With Birds by Esther Woolfson”