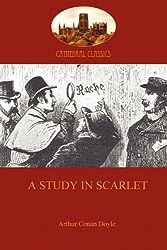 This is the first Sherlock Holmes and Dr Watson mystery, published in 1887. A Study in Scarlet is a novel in two parts. The first, narrated by Dr John Watson, begins in 1881 with Watson on nine months convalescent leave from the army, having been shot in his shoulder whilst in Afghanistan, followed by an attack of enteric fever. As a result he was weak and emaciated – ‘as thin as a lather and as brown as a nut.‘ He was looking for lodgings when he met a friend who introduced him to an acquaintance who was working in the chemical laboratory at the hospital – Sherlock Holmes, who he described as ‘a little too scientific for my tastes – it approaches to cold-bloodedness. … He appears to have a passion for definite and exact knowledge.’

They get on immediately and take a suite of rooms in 221B Baker Street, after Holmes astounded Watson by deducing that Watson had served in Afghanistan. Holmes describes his occupation as a ‘consulting detective‘ solving crimes for both private individuals and the police, using his intuition, observation and the rules of deduction. Tobias Gregson and Lestrade both Scotland Yard detectives regularly ask Holmes for his help.

Very soon they are involved in investigating the murder of Enoch J Drebber, an American found dead in the front room of an empty house at 3 Lauriston Gardens, off the Brixton Road,  with the word “RACHE” scrawled in blood on the wall beside the body.

… a pure-blooded well-trained foxhound as it dashes backwards and forwards through the covert, whining in its eagerness, until it comes across the lost scent.

Holmes is his brilliant best, leaving the police officers behind as he discovers the killer. And there then follows a flashback, narrated in the third person, to Part II The Country of the Saints to America in 1847, specifically to a Mormon community, explaining the events that led up to to the murder, where John Ferrier and his adopted daughter Lucy are first rescued from death in the desert and then subjected to the community’s rules, specifically with regard to Lucy’s marriage. At first I just wanted to get back to the murder inquiry and find out how Holmes discovered the murderer’s identity, but soon I was engrossed in the American story. Eventually the two parts come together in Chapter VI as Watson resumes the narrative and  Holmes reveals how he solved the problem by reasoning backwards and from a ‘few very ordinary deductions‘ was able to catch the criminal within three days.

I thoroughly enjoyed this story, written in a straightforward style with enough description to visualise both Victorian London and the American Wild West. I’d watched the TV version A Study in Pink in the Sherlock series, which although very different in some respects is surprisingly faithful to the book in others. I like both versions.

Sir Arthur Conan Doyle was born in Edinburgh in 1859 and died in 1930. He studied medicine at Edinburgh University, becoming the surgeon’s clerk to Professor Joseph Bell said to be the model for Sherlock Holmes’ methods of deduction. He gave up being a doctor with his success as an author and became involved in many causes – including divorce law reform, a channel tunnel, and inflatable life jackets. He was instrumental in the introduction of the Court of Criminal Appeal and was a volunteer physician in the Boer War. Later in life he became a convert to spiritualism.

See Fantastic Fiction for a list of works by Sir Arthur Conan Doyle.