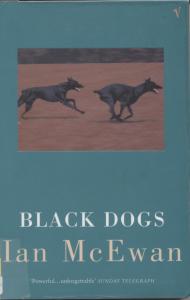 Black Dogs is one of Ian McEwan’s earlier books (his fifth), first published in 1992. The narrator is Jeremy who lost his parents in a road accident when he was eight and from then on he is fascinated by other people’s parents, particularly his in-laws, Bernard and June Tremaine. When he first met them they were living apart, barely on speaking terms. Starting from a shared belief in communism, they had separated when June turned to God after an encounter with evil in the form of two black dogs. What actually happened doesn’t become clear until the end of the book.

Jeremy is writing a memoir about their lives. The book shifts in time and perspective as he talks to Bernard and June separately. So it moves from Wiltshire, where he visits June in 1987 where she is living in a nursing home, to Berlin with Bernard, when the Wall came down in 1989. Then it moves back in time to 1981 at Majdanek where Jeremy met Jenny, Bernard and June’s daughter, during a visit to the death camp near Lublin in Poland; then to the present day (1989) at the family house at St Maurice de Navacelles in Languedoc in southern France; and finally to 1946 with Bernard and June, newly married on their honeymoon in St Maurice de Navacelles, where June had her encounter with the black dogs.

In 174 short pages the characters come alive, their ideas and meditations are revealed, and the places they inhabit are easily visualised. Black Dogs is a book that gets inside its characters’ minds. It centres around love, loss and longing. The incidents Jeremy describes are open to interpretation – June and Bernard are the extremities, neither seeming to be on the same wave length; Bernard a rationalist and a scientist, June a mystic and believer, seeing the same events through different perspectives. Jeremy is impatient with the difficulty of communication, seeing

an image of parallel mirrors in place of lovers on a bed, throwing back in infinite regression likenesses paling into untruth. (page 90)

The question of the black dogs hangs over the narrative – were they symbolic of evil, or an expression of Churchill’s term for depression, or real creatures? Their impact was immense however you look at it. Black Dogs is a book I really enjoyed reading and thinking about after I finished it.