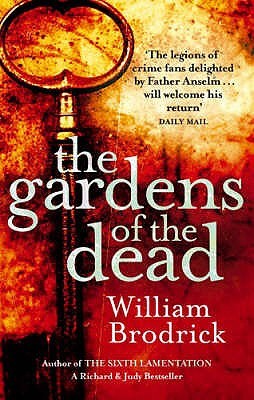 The Gardens of the Dead by William Brodrick is his second novel. Although this book is a page turner I felt it was rather disjointed in parts. I had to backtrack a few times to make sure I was following the plot and the timeline is occasionally confusing. But on the whole I thought the book was pretty good.

Elizabeth Glendenning QC dies of a weak heart at the start of the book. Ten years earlier she had successfully defended a guilty man, Graham Riley. Just before her death she devised a scheme to bring Graham Riley back to court and to implement this scheme she had enlisted the help of Father Anselm, the barrister turned monk and her son Nick. She left a safety deposit box key with Father Anselm along with instructions that he should open it in the event of her death. Once he does this a sequence of events is triggered as Father Anselm and Nick follow the trail laid out by Elizabeth.

Part of me, the cynical part, wondered why she did this – it would have been much simpler to simply leave a written account rather than set what turns out to be a puzzle to be solved. But another part of me enjoyed seeing the mystery unfold. There are several surprising and some not so surprising elements to this story of good and evil, of revenge, family loyalties, justice and morality.

I liked the character of Anselm. He is kind and patient, well versed in analysing information and questioning people from his work at the Bar and also a good listener. My favourite character though is Father Andrew, the Prior, who was fond of a saying from a Desert Father:

So he didn’t talk much and was always cautious when he spoke, but throughout the book he has several conversations with Anselm which are always perceptive and wise.

I borrowed this book from the library and at the time I thought the author’s name was familiar to me but couldn’t remember reading anything by him or reading any reviews of his books. Later I realised that I have the first novel he wrote The Sixth Lamentation, languishing somewhere in my to-be-read piles. Now I really must dig it out to read more about Anselm.

2 thoughts on “The Gardens of the Dead by William Brodrick: Book Review”