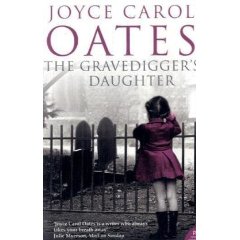 I finished The Gravedigger’s Daughter by Joyce Carol Oates last week and parts of it have remained in my mind. Mainly I think it’s the general atmosphere of its world. It’s a grim, dark world, a violent and pessimistic world, gothic and grotesque. In some ways it reminds me of Hardy’s novels – you know something terrible will happen whatever the characters do to try to avert tragedy.

The main character is Rebecca Schwart, born in New York Harbor, the daughter of Jacob and Anna escaping from Nazi Germany in 1936. They live a life of abject poverty whilst Jacob can only find work as a caretaker of Milburn Cemetery, a non-demoninational cemetery at the edge of the town. A rent-free “cottage”, which is a stone hovel of four cramped rooms,  goes with the job. Jacob, once a maths teacher is reduced to a troll-like figure, harassed and tormented by schoolboys and young men: “Gravedigger! Kraut! Nazi! Jew!”.

It’s this first section of the book recounting Rebecca’s childhood that has stayed with me; the effect of the suppressed anger, prejudice and resentment on the whole family. Her mother Anna, retreats into a world of her own, hiding away from other people “the outsiders”. It’s only through through listening to music on Jacob’s radio when he is out of the house that she can communicate with Rebecca. Briefly the family have their hopes raised with the news that Anna’s sister and family are fleeing Germany and will come to live with them. Rebecca is excited and entranced by thoughts of her cousin Freyda and imagines playing with her, whilst Anna does her best to ‘fix-up’ the cottage. Alas, they never arrive. Jacob is sickened by his inability to protect his daughter and exhorts her to hide her weakness:

He told her solemnly as if she were of a age to understand such words, “Humanity is fearful of death, you see. So they make jokes about it. In me, they see a servant of death. In you, the daughter of such a one. But they do not know us Rebecca. Not you, and not me. Hide your weakness from them and one day we will repay them! Our enemies who mock us.”

Eventually, Jacob’s rage at his desperate life erupts into violence and life is never the same for Rebecca and her brothers.

More violence and despair follow as Rebecca falls in love with Niles Tigor, a man whose moods alternate wildly, one moment tender and passionate towards Rebecca and then cruelly indifferent and brutally agressive. Rebecca has a miscarriage, brought by Niles’s violent attack. She stays with him until she can no longer bear his cruelty and in fear of her life and that of her son Niley she turns on him and flees thinking she may have killed him.

The third section of the book follows her life with Chet, his desire to marry her and her increasing anxiety and fear that Niles will discover where she is. Chet is a musician and helps Niles to become a pianist. Chet is from a wealthy family in contrast to Rebecca, now Hazel and she lives a life of luxury, still haunted by the fear of Niles. Music is a motif that runs through the book. Niley has inherited his musical talent from Anna, who used to play in the ‘old country’ and stifled by Jacob she still listened secretly to music on the radio and introduced Rebecca to Beethoven’s Appassionata; a memory that Rebecca cherished throughout her life, culminating in Niley’s triumphant performance of the sonata. I read the account of his performance with increasing tension as Hazel (Rebecca) can hardly breathe in her dread of a catastrophe.

History and how we perceive it is a thread running through the book. Here are two quotes that struck me:

History has no existence. All that exists are individuals, and of these, only individual moments as broken off from one another as shattered vetebrae.

History is an invention of books. In biological anthropology we note that the wish to perceive “meaning” is one trait of our species among many. But that does not posit “meaning” in the world. If history did exist it is a great river/cesspool into which countless small streams and tributaries flow. In one direction. Unlike sewage it cannot back up. It cannot be “tested” – “demonstrated”. It simply is. If the river dries up, the river disappears. There is no “river-destiny”. There are merely accidents in time.

But it’s the final section for me that stands up to the story of Rebecca’s childhood and in some ways completes the story. And yet …

I don’t want to spoil it for anyone, so I’ll just say the ending did surprise me and touched me enormously. It made a great ending for this melodramatic and memorable book. There is an interview with Joyce Carol Oates at the back of the book and I was not surprised to read that this part of the book had the power to bring tears to her eyes, even though she had written it herself. It brought tears to my eyes too. The favourite parts of the book for her included the scenes in the gravedigger’s house and the exchanges between the father and his children, which I think are very powerful.

I’ve also written about this book here and here. It qualifies for my second book for the RIP III Challenge.

4 thoughts on “Final Thoughts about The Gravedigger’s Daughter”