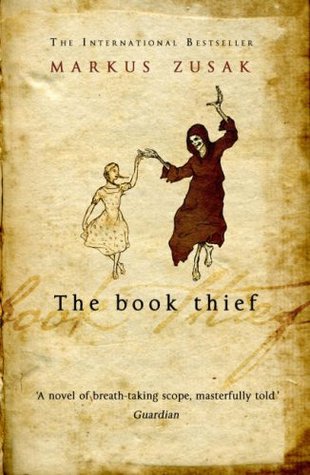 I was not that keen on reading The Book Thief when I first heard about it. One reason, and this is quite contrary of me, I know, is that people were raving about it and that always makes me wonder whether a book can really live up to its reputation. The other reason was that I had the impression it was about the Holocaust, concentration camps and the Nazi persecution of the Jews and I would find it too heart-rending. Then I gave in and thought I’d better read it to see what all the fuss was about. It had been sitting on the book shelves unopened ever since I bought it until it was chosen as the next book to read in Cornflower‘s on-line book group.

Death is the narrator of the book. Oddly enough, I became fond of this character, Death, as the story progressed. Death is compassionate, commenting on man’s inhumanity to man and he is very overworked. The action takes place in Nazi Germany and there are some very moving, tense and emotional scenes. Overall though, the book is about ordinary German people and their experiences during the war, their reaction to the Fuhrer and their efforts to help their Jewish friends and acquaintances. As I was reading about how they survived during the air raids I was comparing it to how the British also coped as described in Our Longest Days. As you would expect, it was much the same. People in both countries suffered.

The “book thief” is Liesel Meminger who is nine at the start of the book in 1939. On her way to live with foster parents, Rosa and Hans Hubermann, she witnesses the death and burial of her brother and finds “The GraveDiggers Handbook”. This is the first book that became very important to Liesel. Her love of words leads to her acquiring more books with the help of her friend, Rudy. She steals a book from the Nazi book-burning fires and from the local mayor’s library, with the assistance of the mayor’s wife. The danger increases for Liesel and the Hubermanns when they shelter a young Jew, Max Vanderburg, in their basement. Liesel’s relationships with Rudy, Hans and Max are central to the story, as Death almost seems to stalk them. Terrible things happen in this book; the Nazis and the Hitler Youth Movement cast their sinister shadow, the people are starving, Jews are persecuted, people are whipped for helping them, and towns and cities are bombed and devastated.

Although this is a long book I read it very quickly; it is an easy book to read. The language is simple and straight forward. Some of the sentences are very short, almost staccato and fragmentary: “Door open, door shut. Alone again.” “The food.” “The carrots.” “I know. You know.” This jarred on me a bit but I suppose that writing like this does make the book easier to read and I was able to read it in just a few sessions. Still, I thought it was a disturbing, unsettling book and I found myself reading it completely absorbed in the story.

It also made me think of The Diary of Anne Frank, which she wrote whilst in hiding for two years with her family during the Nazi occupation of the Netherlands. Her family was apprehended in 1944 and Anne Frank ultimately died of typhus in the Bergen-Belsen concentration camp. This is a heartbreaking account. If you haven’t read it you really must!

9 thoughts on “The Book Thief by Markus Zusak”